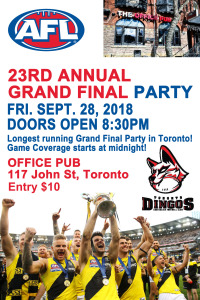 The Toronto Dingos Australian Football Club will host its 23rd annual AFL Grand Final party on Friday September 28 at their sponsor pub The Office Pub on John Street. The annual party is historically the longest serving Grand Final party in Toronto and continues to draw large crowds every year.

The Grand Final party is one of the big fundraising events for the Toronto Dingos Football and draws more than 350 patrons through the door, all looking to enjoy the footy on the 20+ screens.

Here are some of the things you can expect at the Grand Final Party this year:

There will be many current and past players and family members  of the Toronto Dingos Football Club present who will be at the door and around the event. So if you’re interested in having a kick in 2019, please ask one of them for more details or contact coach@torontodingos.ca and direct it to head coach Mike Karas.

Check out our Facebook Event page, share it, and come on down!  Hope to see you all there!