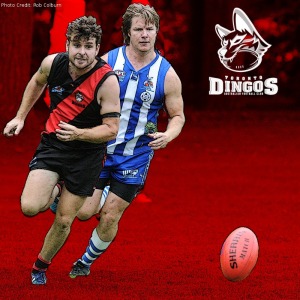 Kicking off round 4 AFL Ontario action the Toronto Dingos will be taking on the Etobicoke Roos at Humber College South (map) this Friday 16th of June with ball-up scheduled for 6:30pm.

The Dingos are 1-1 for the season with the opening win against the Grand River Gargoyles seeming like a distant memory after a tough loss to the Broadview Hawks last Saturday going down 4.3-27 to 15.16-106 (match report).

The Dingos will will be looking to make amends against the Roos, who themselves are 1-1 after a tough opening round on the road, losing to the Ottawa Swans, and a much needed win against the Central Blues. The Roos took that game 6.10-46 to 3.7-25 with a spread of five different players kicking the goals. Here’s what the AFL Ontario match report had to say about that encounter:

The Roos won their first game of the season in an arm wrestle against the Central Blues by 21-points at Humber South. After trailing by seven points at quarter time, the Roos kicked three goals to one in the second quarter to lead by five points at the main break. The Blues found it tough to score goals and only managed 0.3 after half time as the Roos added 5.8 to secure the win.

Given the starts for both teams they will no doubt be desperate to get a second win on the board to establish some momentum for themselves. Should be cracking game of Friday night footy to open the round - get around ‘em!

Are you interested in joining the Dingos 2017 campaign? Email coach@torontodingos.ca today! #jointhepack