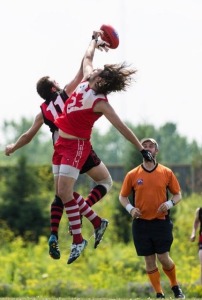 The Dingos have held on to defeat the Ottawa Swans by 7 points in Round One of the AFL Ontario season in one of the best team performances that the club has had in years. Having lost the past four encounters against the Swans, the red and black knew that Saturday's match was going to be a tough battle, and the hot temperature and humidity didn't make things any easier.

With only one Canadian on the bench, the Dingos called upon veterans Peter Gordon and Tim Shaw to help fill out the squad, and both played important roles in the win. Everett Wells was solid in the ruck, coming up against a very good Ottawa opponent and running out his 100th game with no substitutions.

While the Swans managed to hit the scoreboard first, the Dingos were the team that held the lead at every break thanks to a three goal performance by rookie Canadian Thomas Santibañez-Espinosa, three goals to winger James Duggan and two to "new Canadian" Paul Tinkler.

Up by four goals at three-quarter time, tired legs took over as the Swans began to mount an impressive comeback. Mike Bocian played his best quarter for the club, spoiling everything that entered the backline and charging out of defense with confidence. The Swans clawed back to within a point with minutes to go, but a clutch set shot goal from Pat Bossey sealed the victory for the Dingos.

Steve Speers was named best-on-ground in his first game for the club, dominating out of the middle and winning contests all day long. Fellow new-recruit Dan Gunn was also strong in the midfield and off half-back in his Dingo debut.