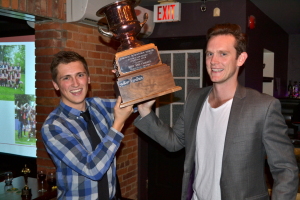 Close to 40 Dingos, girlfriends, wives, and supporters dressed themselves up and made their way to The Office Pub this past weekend to celebrate the 2015 season.  The annual Awards Night is always a great event - one final chance for the club to gather and celebrate the season before the long winter hits.

Some highlights of the 2015 night:

Here is the full list of award winners for the night:

Huge thanks to The Office Pub for hosting the event and to Dave and Everett Wells for organizing the night.