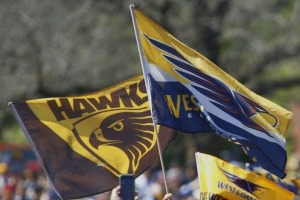 For the 20th year in a row, the Dingos were proud to host an AFL Grand Final party, once again partnering up with our great sponsor, the Sports Centre Cafe.

While a bit quieter than in previous years, the Dingos still managed to pack in over 200 guests, who all saw a dominating win by the Hawthorn Hawks over the West Coast Eagles.  A successful raffle was held, with the winners listed below.  Huge thanks to those who donated prizes, including Kanga Pies, the Australian Boot Company, and DownUnder Travel!

For the Dingos, the AFL Grand Final party is one of the final social events on the calendar.  However, some big ones remain; some of the boys will be participating in the annual footy trip, this year to Cancun, Mexico.  And in early November, the Red & Black will gather to celebrate the successful 2015 season at Awards Night, to be held at The Office Pub on November 7th.