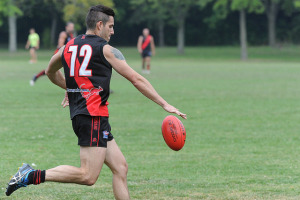 Div2 squad has defeated the High Park Demons in a thriller at Humber South to enter its third consecutive Grand Final.

Due to some recent changes to qualification "rules", the Demons team boasted several Div1 players and threatened to steal the match all day long. Kicking with the wind, the red and black jumped out to an early first quarter lead, with goals to Alvin Ranchhod, Rob Eckford and Stephen Elliot. However the second quarter saw the Demons pile on the pressure and pepper the goals with scoring shots. The Dingos back line held firm, but some poor decisions leaving the back 50 allowed the Demons to narrow the margin at the half time break.

The Dingos knew that they needed to capitalize on the heavy wind in the 3rd quarter, and Joel Beasley was able to extend their lead by slotting a goal. The Demons responded, though, leaving the Dingos ahead by only three points heading into the final quarter.

The Demons could tell that they were on the verge of an upset as they scored early in the last quarter to take the lead for the first time all day. It seemed like a near impossible task for the Dingos to reply into such a strong wind, and as the quarter rolled on it looked as though the squad's season was minutes away from reaching a disappointing end. With only moments to go in the match, Alvin Ranchhod booted the ball from the boundary, 50m out from goal. The ball bounced and hung in the air for what seemed like an eternity, before veering at a right angle to go through the middle and give the Dingos a 4 point lead. The red and black were able to hang on and clinch a well-deserved Grand Final berth, having been the strongest Div2 team all year.

The Grand Final will be contested by the Dingos and Rebels on Saturday September 19th at 11am at Humber South. Get out to support the boys as they look to win their second flag in three seasons.

Inspired by the gutsy performance of their Division 2 mates, a fired-up Div 1 squad took to the field for their semifinal matchup against the Etobicoke Kangaroos.  Prior to the match, coach Robbo urged the lads to play the same successful brand of tough footy that they've shown all year.

Hungry from the first bounce the Dingos came out firing.  Tom Bell was doing well in the ruck and the on-ballers kept feeding the ball long into the double-threat of Wado and Fridgy up front, each of whom kicked a goal in the first quarter.  The 'Roos responded, though, with their forwards taking some strong marks and slotting the footy through the uprights.  After the first quarter, the Dingos were up by a goal, but lamented some missed opportunities.

Unfortunately for the Red & Black, the match started to turn in the second quarter.  Aussie stalwarts Andrew Gaut and Fridgy went down with injuries early in the quarter and were done for the day.  Without another big target up front, Wado was swarmed by 'Roos and they were able to rebound the footy out time and again.  And despite valiant work in the middle by tagger Patrick Bossey and Tom Humphries, the Roos were able to feed their forwards more consistently, resulting in a 6-goal outburst for the quarter.  Heading into the half, the Dingos were down by two goals and knew that a tough battle lay ahead.

True to the gutsy play they'd shown all year, the Dingos dug deep and kept the 'Roos close in the 3rd quarter, matching them goal for goal.  A long goal from Thump out of the middle, as well as inspiring hard work up front by Wado gave the boys a lift, but they were unable to reel in the 'Roos.  A blow to the head of Noddy ended his day and the Dingos were unable to mount consistent pressure on the 'Roos backline.

Captain Shaun McKay urged the club for one last push at three-quarter time, and ran himself ragged all over the ground in the final quarter.  Goals from James Duggan and Wado kept the pressure on the 'Roos, but the Dingos were unable to shut down their attack and the 'Roos pulled away for a 4-goal victory.  A tough end for the Dingos, who finished the season with two straight losses.  Many felt this was the most skilled Dingos club in years, but it was not enough to carry them through to the Grand Final on this day.  A disappointing end to the season.