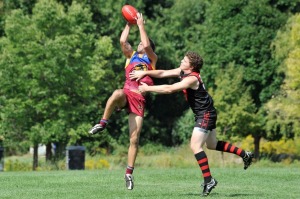 Toronto Dingos have secured a top two position on the OAFL ladder with a commanding 107-pt win against Guelph at Humber South on Saturday afternoon.

The win came with a record. Wade Edwards booted six goals to take his tally to 58 for the season, eclipsing Josh Dray’s 57 goal-season.

Playing 15-a-side, the Dingos got off to a flyer kicking three quick goals in five minutes. Guelph only managed two inside 50 for the quarter and at the first break the Dingos had amassed 11 scoring shots to 2, and held a 34-pt lead. By halftime that lead extended to 62-pts and by three-quarter time it became 84-pts.

The midfield unit lead by Alex “Ant-eater” Aitken, Shaun “I-have-a-Mrs” McKay, and Geoff “TTC” Hansen spent the game collecting a mountain of hard balls, winning the contest at ground level and delivering the ball into the forward line with aplomb.

With the midfield on fire, it meant the classy forwards had a day out: Wade “DJ” Edwards claimed six goals; Rob “Nodzilla” McNaughton booted five; and Jimmy “Halifax-snap-is-back” Duggan with three. Niall “Sure-to-be-sure” O’Kane and Sean O’Reilly also assisted the forwards with defensive pressure and goals as well.

The win takes the Dingos to 8-3 with one round remaining against the High Park Demons, with a top two spot all but locked in. Next week is also the Toronto Dingos Family Day BBQ, which should be a great afternoon of burgers and beers.