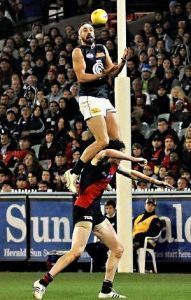 The Toronto Dingos Football Club are recruiting new players for the 2015 football season!

Not sure what Australian Football is? While it is a unique sport, it encompasses many different aspects of other sports that you are probably familiar with. We'll teach you everything you need to know. No experience necessary.

This is an open invitation to everyone who loves sport, likes to meet new people and be part of a thriving team in the city of Toronto. We will be hosting FREE introductory sessions throughout February in the leadup to our season. Check out our Facebook event for these sessions here.

The Toronto Dingos Football Club is composed of players from countries all over the world, including Australia, Canada, Ireland, UK, the Netherlands and more. We are one of the most competitive teams in the Ontario Australian Football League. We train and play hard, but we also like to have fun!

Here are some key points about the league and The Toronto Dingos Football Club:

* Opportunity exists to represent Canada in the International Cup, held every three years in Australia.

* Season runs from April to September.

* There are weekly social functions throughout the season, as well as regular functions in the offseason.

* The Dingos host the best and only Aussie Rules Grand Final Party in the city that attracts over 400 people.

* During the season training is Tuesdays and Thursdays, games are on Saturdays.