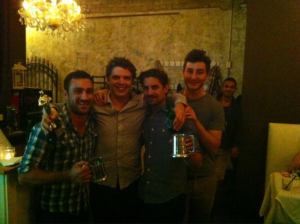 One of the last official events of the 2014 season was held this past weekend as around 45 Dingos and family gathered for the club's annual Awards Night.  Held at Joy Bistro on Queen St, the Dingos were looking to ease the memories of a disappointing season.  The night did not disappoint as the Dingos were in high spirits, with MC Spider Wells taking them through the night's vote count and individual award presentations.
Some highlights:
Full award winner as follows:
Goalkicker - Tom Humphries and Chris Buczkowski
Coach's Award - Gary Conlon
Most Improved Player - Joe Carrig
Steinberg Award - Justin Robertson
Player's Player - Tom Humphries
Rookie of the Year - Colin Turner-Bloom
Stewart Award (Can) - Tom Bell
Stewart Award (Aus) - Alex Aitken
Div 2 Best & Fairest - Rainer Haycraft
Game Milestones - Shaun McKay (50) and Paul Tinkler (150)
Life Membership - David Wells and Bobby Clarke
Congratulations to all winners!