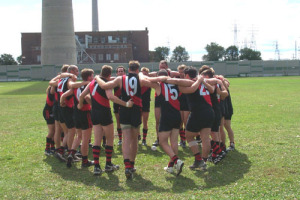 This time last year Div.1 boasted a 3-1-2 record (three wins, 1 draw and two losses). Hardly flying, but we were playing good football. The two losses were by 3-pts against the Eagles and 16-pts against the Rebels. Both games could have gone our way but they didn’t. From memory I think we were fourth on the ladder at the halfway mark. Most AFLO pundits didn’t pick us to make the Grand Final based on our record at the halfway mark but we did. Why? We simply played good football. This year we don’t have as many wins at the same stage. We have just the one win and five losses but we're playing good football and look better each week.

This season we just haven’t managed the wins to mirror our hard-at-it approach. We roll up our sleeves every game but we're just not getting the results we want. And that happens in football sometimes. Granted, our team is completely different to last year as we lost five quality bodies and have blooded six or so rookies. What I’ve enjoyed is seeing this season is the Dingo rookies evolve in leaps and bounds in just six games: Colin Turner Bloom, Tyler Penell, Eoghan Flynn, Paul Browne and Ryan Caron. All have been asked to jump into the deep end and have excelled at every task and keep getting better each week; leading down the wings, applying defensive pressure and kicking goals. Development coach Ben Kavenagh has dedicated his time this season teaching these players before training the basics and it’s starting to now pay dividends.

There have been a couple of games this season that, if it went our way, would have changed the complexion of season 2014. I look back to the Friday night Roos match, the 13-pt loss. A match we had control of for three-quarters but let slip. We let them back into the match and got lazy. Then there was the Eagles match a few weeks back. They strolled out to a 47-10 lead before we decided to have a crack. Miraculously, we got within 11-pts deep in the final quarter but lost by 19-pts. And even last week against the Swans we clawed our way back from 37-pts down to within 14-pts only to run out of legs on a hot day in the last quarter. That’s three winnable games we didn’t close out and had those wins eventuated we’d be sitting at 4-2; better than last year’s halfway mark record. Those losses will haunt us in 2014 and leave us with a lot of work to do in the remaining six games.

Morale at the club has been great and it shows on the field. We’ve been challenged in every game we’ve played and to the boys’ credit, they’ve gutsed it out; even when we’ve been six or seven goals in the red. We’ve stuck together in games we’ve been losing and that, to me, is a great sign of good character and what I love about this current team. We play for each other. At  1-5 we still get a core group of Dingos down to training who fine tune and want to learn. As a club we all know it hasn’t been the season we thought we could produce. One could be disappointed that we haven’t matched last year’s run. But we’re playing good football with a smaller playing list, more rookies and an Aussie midfield that is now starting to hit their straps as a unit. That’s an achievement in itself and a fact I’m proud of as coach. In the final six games we’ll get Wade Edwards back and Canadian all-star fullback Mike Karas too which will add firepower to both ends of the ground. As long as we play good football, “Dingos Football”, win number two is just around the corner.