Round 6: Div.2 two-year winning streak comes to an end against Rebels 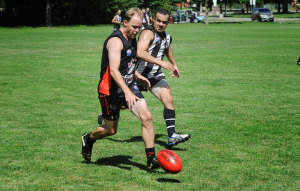 The Rebels boasted a handful of strong Aussie players while the Dingos were lucky enough to put a team together narrowly avoiding a forfeit. Some six Div.1 players took the field knowing they had a match to play against the Swans right after the game. This made for a tentative encounter with the Dingos playing hard enough to compete but careful enough not to incur injuries.

The Rebels started the match strong and while the scoreboard never blew out at any stage, were never challenged against an undermanned Dingos team.

Mick McFarlane, Ryan Cross and Dan Prior never stopped running and linked up well on the flank. George Craig dominated the ruck contest and seemed to pick up touches in all parts of the ground. The big man won nearly every tap and fed the on ballers at the center clearances. Tom “Thumper” Humphries and Irish winger Eoghan Flynn dominated the middle parts of the ground early, handing Tim McKay and Gary Conlon goals.

Despite some gutsy defending by Justin Robertson and Joe Carrig, the Dingos back half couldn’t hold off the fast running Rebels midfield as they kicked clear after half time.

In the second half Div.1 players were rested and the Rebels kicked away to record a win for their club and the first loss for the 2013 premiers in more than 20 games. Tom Bell dislocated his finger during the match and went on to play an outstanding Div.1 game against the Swans: as did several Dingos who played two games last Saturday.