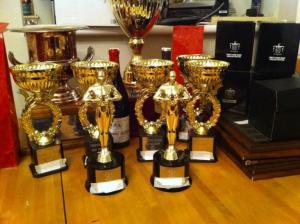 On Saturday, Oct 26th the Dingos family got together for the annual awards night at Fionn McCools. It was great to see close to 50 people attend - players, wives, girlfriends and supporters. As it was close to Halloween, the executive decided to make it a Halloween costume party which made for a lot of fun and some creative get ups. A premiership flag was presented to the Div 2 team and the players were asked to sign the back. This flag will be hung in the SCC cabinet.

A number of thank you's were given throughout the course of the night.