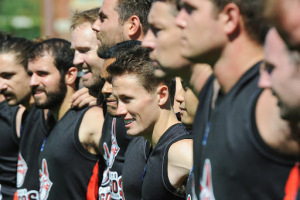 In the penultimate game of the OAFL Finals, the Division 2 Dingos showed why they are championship material with a 77 to 0 point thrashing of the Central Blues.
The game started off cautiously as the red and black took time to size up their opponents, putting only 4 points on the score board. After a rousing team talk from Coach Mick McFarlane the boys ripped into the 2nd quarter with guile and tenacity that would never lose momentum for the rest of the game.
The middle of the field was Dingos territory with Big Jim Sheehan dominating every tap in the ruck. Tom Evans had an absolute masterful performance in the centre, carving up the Blues defense repeatedly and struck 4 superb goals. Mick Densworth had the game of his life with his constant running, fast ball possession and clever distribution as well as slotting in a goal of his own. This all-star midfield was topped off by Captain Alvin ‘Chippy’ Ranchhod whose physical presence and dogged determination paved an opening for the Dingos to push up into scoring positions and even snuck in a little goal glory of his own.
Drew Bremner and Ryan Cross’s defensive line at half back shot down the very few Blues attacks that did come their way, leaving full back Stephen Gordon and Joe Carrig little to do in the defense. The midfield domination was fleshed out along the flanks by JV Arnaldo and Roman Belli with both guys running hard down the flanks all game.
The Dingos were all about creating opportunity and the forward line had bags of it with Div 2 sensation Ben Kavenagh notching up 5 goals. Tim McKay and Dan Prior worked relentlessly to open up the forward 50 for OAFL Div 2 top goal scorer Paul Tinkler. The lanky legend ran the defense ragged all day but was very unfortunate not to build on his award winning goal tally.
The Red and Black interchange was in constant flux as Luke Coonan, Robert Fitzhugh and Pat O’Shea filled in on the wing, half back line and half forward line respectively. Each man put in an effective display and maintained the quality football that would eventually book the Dingos place in the Grand Final.
This Saturday will be the ultimate test for the undefeated Div 2 Dingos as they meet the Broadview Hawks in the OAFL Grand Final.
Final Scores:Toronto Dingos 11.11 (77) def Central Blues 0.0 (00)
Goal Kickers: B. Kavenagh 5, T Evans 4, A. Ranchhod, M. Densworth
Best Players: T. Evans, B. Kavenagh, M. Densworth
Div 2 Dingos face the Broadview Hawks at Humber South in the OAFL Grand Final at 11.30am