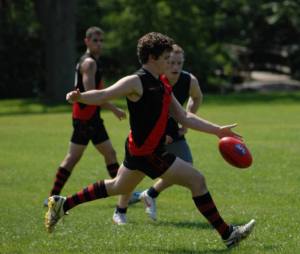 While the Div.1 team is still waiting on one more result to learn where they will finish, Div.2 completed an undefeated season with a hard fought 7-pt win over the Demons earlier this week.

Both teams will play finals.

Div.1 started the season strong with three solid wins against Guelph, Hawks, Swans and a draw against the Roos. This was followed by two losses against the Rebels and Eagles by 16-pts and 3-pts respectively.

At that point their record stood at: 3W 2L 1D [six matches played].

The boys then went about correcting their flailing season with five wins on the trot, only to end the regular season with a big loss to the Demons by 54-pts.

Div.1 will now face either the Hawks in dead rubber, or Guelph in an elimination final.

Div.2 had a charmed run all season. It wasn’t all easy though.

They started the year with two close wins against the Demons [16pts] and last year’s premiers the Hawks [22pts].

Both games could have gone either way.

Next up they handed the Rebels [51pts] and the Blues [52pts] consecutive thumping defeats.

After a rained out week against the Demons, Div.2 again lined up against the Blues and Rebels that produced mixed results.

The Rebels match was a lot closer this time round, with Div.2 pulling through with a scrappy 15-pt win. The Blues game was a belting. Div.2 kicked 17 goals for the match and galloped to a 90-pt win.

Div.2 played the Demons twice more. Both wins. One by 63-pts, the other was by 7-pts this week.

Completing an undefeated season at any level is a terrific feat, one that needs a bit of luck and a committed team. Led by captain Alvin Ranchhod all season, the Div.2 boys never looked like losing a game and always seem to have the answers when challenged.

Div.2 had an average winning margin of 39.5 for the season; their percentage finished at 277.53 [130 more than second place]; and they finished four games clear of their next opponent.

Both teams now prepare for a finals series.

* All the best to both teams for the 2013 finals series. Keep up the hard work*