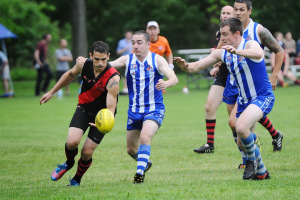 The Dingos have convincingly beaten long-time rivals the Etobicoke Kangaroos for the first time since 2010, coming out on top by 90-points in round 10 action.

Both teams showed up to Humber South on Saturday morning with many regulars missing. For the Roos, Justin “Chipper” Harris and ruckman Andrew Hogan were both absent, two players that have been very good against the Dingos in the past. The red and black were Wellsless, while Craig Stewart and captain Tom Bell were also missing. Luckily for the Dingos, the team’s depth was evident on the weekend, as they were able to dress 22 players despite so many regulars being out.

The Dingos managed to lock the ball in their attacking half for the majority of the first quarter, but struggled to convert in front of goal. Wade Edwards and Chris Buczkowski finally broke through for the red and black, as they took an inaccurate 2.5 score line into the first break.

The second quarter played out much like the first, with the Dingos wasting opportunities despite completely controlling the play. Rookie Kristian Frantzen, playing his first game in the ruck, competed hard against Northwind ruckman Manny Matata and helped his midfielders get a lot of quality clearances around the ground. Rainer Haycraft continued his strong form since joining the red and black, again getting a lot of the ball and dominating in the middle. However, despite the quality work that was happening in the middle, the Dingos again kicked 2.5 for the quarter and went into the main break with the game still very much in the balance.

The half time talk was all about converting opportunities in front of goals, as the Dingos knew that they had the Roos’ number around the ground and didn’t want to see their inaccuracy cost them the match. They came out firing to open the second half, with goals to Buczkowski, Edwards and Mick McFarlane creating some breathing room. The back line looked comfortable all afternoon, and it was their play in the third quarter that really helped the Dingos pull away. One play in particular saw the ball move from a kick-out all the way to the other end of the ground in no more than 20 seconds, with the Latino Sensation Camilo Serpa finishing it off with a great mark and goal. The quarter finished off with second year Dingo Pat Bossey spoiling what looked like a sure mark inside 50 just as the siren sounded, something that he did every time the ball went near his opponent.

The red and black entered the final quarter knowing that the game was all but won, but intent to get revenge on the Roos for the hidings that they had dished out over the years. The play again rarely left the Dingos forward half, and when it did, half back flankers Shaun McKay and Yoni Moussadji were quick to run the ball up and kick it long back into the forward line. Goals to Matt Pollett, Max Parish, Jimmy Duggan, Edwards and Buczkowski saw the Dingos sail home to their biggest win of the season and remain second on the OAFL ladder.