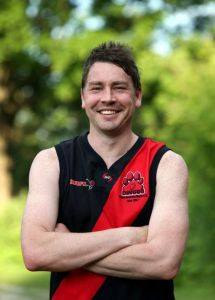 Q. Where in Australia did you hail from?
A. I came from Melbourne, originally grew up in Springvale.
Q. What AFL Team do you support? Do you follow any North American Team? if so who/why?
A. I support Essendon back home, have done so since I was born. Being a Cross and barracking for any other team would be sacreligous.
As far as North American teams go, The Leafs for hockey as it made sense to me as I would be moving to Toronto, and since I have arrived, I have enjoyed watching the Blue Jays in the baseball.
Q. What is your favourite and least favourite things about Toronto?
A. Favourite thing;
Almost everything, living in Toronto, is extremely similar to living in Melbourne. The culture, people even down to having streetcars. This is the first time I have lived away from Australia, so really enjoying learning about the city and its diverse range of people & traditions.
A. Least favourite thing;
D*ckhead drivers (read taxi drivers). I commute from downtown to Brampton each day and I have never in my life seen so many arrogant bad drivers. (And ive spent some time in India!) People will go out of their way to get one spot in front of you. Yea, that;s my least favoutrite thing, rant over.
Q. What are you thoughts on playing footie over here?
A. All I originally wanted to do was to train, get fit and meet a bunch of people who shared similar interests with me. It's been about 18 years since I played in a competition, so wasn't sure what to expect. So far, it's been great, something I really look forward to. The level of skill is higher than I expected too. PS, Footy is spelt with a 'y', you have been told this before.
Q. You are apart of a very sucessful Div 2 team whats it like to play on this team?
A. Playing on this team has been great so far. I have played all games and it feels great to be part of a tem who remains undefeated for the year after playing all the teams. My positions thoughout the season have moved around, but find myself feeling settled in the centre half forward line. Really looking forward to keeping it up and bringing a flag home for the Dingo's in my first year. That would be perfect.
Q. What are your favourite things about being apart of the Dingos Football Club?
A. Before I joined up with the club, I did not know many people in this city as I have only been here since Jan 2013, I have made many friends and feel like part of a group now which makes the transition from home so much easier. Back home I have always been around football clubs, so this is something I am used to. There is always something social going on, but no pressure to take part in everything. Also training has been great and am feeling so much better for it. I enjoy helping out on weekends and being part of the Div 1 game, even though i'm not playing.
Q. What has been your Favourite moment/event with Dingos so far?
A. That's a tough one. Nothing in particular, but game days & having a beer on the sidelines after a match would have to be up there. Oh our weekend sessions at the BP aren't too bad either.
Q. Overall what would you like to achieve this year with the club?
A. Fitness, new friends & holding up the Mike Pyke Cup in September, would be great.
Q. Who is your favourite dingo and why?
A. Nobody in particular, everyone i've met along the way has been great.