Div 2 Dingos remain undefeated as they rout the Rebels. 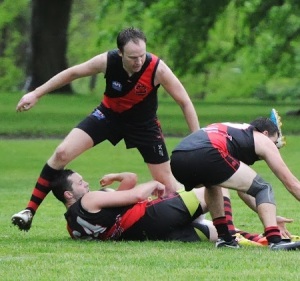 The Rebels were beaten in each quarter as a younger and more skilful Dingos side kept the opposition in their own half for most of the game. Using their extra pace the Div 2 Dingos got numbers to every contest and gave their opponents no space to play as they eventually exhausted the Rebels to 51 point defeat.
The Dingos commanded the center with an all Aussie midfield that not only created most of the offensive opportunities, but also became the choke point for much of the Rebel counter attack. Playing his first game for the club, Ben King collected and disposed of the ball superbly in a series of great displays of awareness and vision, also kicking a goal in the 2nd quarter. Ruckman Steve Gordon was instrumental to the Dingos possession, winning the majority of the taps and following up with many important tackles and handballs. Avi Koth, also playing his first game, applied his speed and agility to carve through the Rebels' defense. The first year Aussie was unlucky not to score a brace of goals in the 3rd quarter. Alvin Ranchhod was his usual vivacious self, leading by example and scoring his first goal as Div 2 captain.
JV Arnaldo played a solid game. His constant running wore down the opposition both physically and mentally as his persistence netted him three excellent goals and handful of assists. Supporting him at the back end were Gary Conlon, Steve Lanning, Robert Fitzhugh and Pat O’Shea who linked up well to keep out Rebel advances. Conlon pushed forward and scored his 3rd goal of the season.

Tim McKay made a welcome return to the club with some great efforts in the forward pocket. At full forward, Dan Prior made himself a big target and should have come away with more than a goal to his name. To the Rebels' credit their defense shut down play as best they could and forced most Dingos' goals to come from the midfield; however, the introduction of Dingos veteran Paul Tinkler in the second half changed that with the old warhorse scoring three goals.

Roman Belli and Ryan Cross were in constant pursuit of the ball, putting pressure on the Rebels defense with most of the Dingos' best plays originating from their contests on the ball.
The Div 2 Dingos play the Central Blues on the 20th of July at Humber South. Unfortunately, it will be almost a month until their next game but a win against the Blues will mean that the Dingos have beaten all teams in Division 2.
Goal Kickers: P. Tinkler 3, J. Arnaldo 3, A. Ranchhod , B. King , G. Conlon , D. Prior
Best Players: B. King, J. Arnaldo, S. Gordon