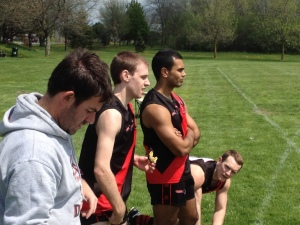 The Toronto Dingos got things started on the right foot today, showing great commitment to the footy and some great run in the legs during the Preseason Cup match against the Broadview Hawks. With six new Dingos suiting up for the game, many of them playing footy for the first time, it was a great effort to see and bodes well for the 2013 Season.

The beginning, middle, and end of this match was the grit and determination to win the footy out of the pack, particularly in the play through the midfield where the Red and Black applied the most pressure. First-time Dingos Mal, Pickers, Max and D'arcy all played fantastic in their respective debuts, leading by example and moving the pill forward time and again. Supported by the veteran presence of Stewy, Jimmy and Shauny, the midfield quickly became a quagmire for the Hawks, who struggled to use the space of 14-on-14 and were consistently getting hemmed in their own zone.

The backline as a whole stood strong, though rookie Will Sharpe playing his first game at fullback led the way with some great poise and drive for the footy.

All of this made the job of the front line much, much easier, as the goals piled up early and the Dingos jumped out in front, never to look back.

Since this was preseason, the exact score and goal scorers are somewhat unimportant, so we'll save the stat breakdown for the real opening weekend (sorry, Jimmy). Speaking of which, the official 2013 OAFL Season kicks off May 25th in Guelph for the Red and Black, as they take on the hometown Gargoyles.