Looking to have a kick overseas? The Toronto Dingos are recruiting for 2013! 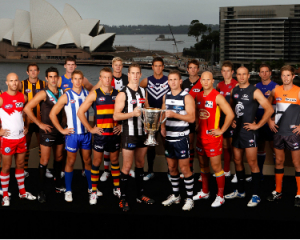 The Toronto Dingos Football Club is currently recruiting players for the 2013 season!

As the Ontario Football League grows, the amount of quality Australian players that come through also grows.

We are looking for players who want to have a kick for a season or  stick around  to help develop the Canadian players we have on our list.

The team is made up of Australian expats, Australian travellers and Canadians. We have Australians who have played for clubs throughout Oz such as Bunbury (W.A), Old Haileybury (VIC), Melbourne High (VIC), South Melbourne (VIC) to name a few. Check out the player profiles for more info on former clubs. We may have someone from your club that plays with us or has played with us before!

Our first session will be "Meet the Coach Night", a pre-season outdoor run on@ 8 p.m. , Jan.3 2013 @ Sports Centre Cafe on St.Clair Avenue (followed by a few beers). But the season officially starts April/May.

Playing football overseas is a great opportunity for some young players to make new friends and experience life in another city -- and have a kick of the footy while you are doing it! The Dingos are a great bunch of blokes and we'll certainly look after anyone that wants to have a kick abroad.

Pre-season will commence in January. Last year we held our first indoor football competition. You can read about it here. We also are very active socially over the pre-season with pub nights, a hockey game (Marlies) and a winter cottage weekend.

We can answer any questions you may have regarding visas, job opportunities and accommodation if you want to stick around for a season or two.

Also, Toronto is VERY central. It’s an hour by plane to places like New York and Chicago (cheap too), it’s six hours from Montreal by car or train, six hours from Vancouver and six hours from Europe. So It's ideal if you have travel plans before and after the footy season.

Here's a brief snippet of what you can expect.

* Season runs from April to September.
* There is an Dingos awards night and also an OAFL best and fairest night.
* Opportunity exists to work with a local junior football program teaching footy to Canadian schools.
* Dingos footy trips in the past have included Cuba, Boston, Montreal, Cleveland, Buffalo-Niagara and Pittsburgh.
* The Dingos host the only AFL Grand Final Party in the city that attracts 400 people.
* Training is Tuesday and Thursday (pub night – team dinner and beers).