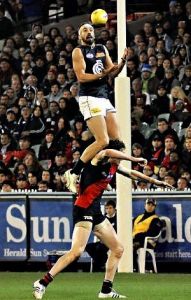 The Toronto Dingos Football Club are recruiting new players aged 16 and up for the 2013 football season!

Not sure what Australian Football is? While it is a unique sport, it encompasses many different aspects of other sports that you are probably familiar with. We'll teach you everything you need to know.

This is an open invitation to everyone who loves sport, likes to meet new people and be part of a thriving team in the city of Toronto.

The Toronto Dingos Football is divided into Australian expats and Canadians and are one of the most competitive teams in the Ontario Australian Football League. We train and play hard, but we also like to have fun!

Pre-season will commence in January. Last year we held our first indoor football competition. You can read about it here. We also are very active socially over the pre-season with pub nights, a hockey game (Marlies) and a winter cottage weekend.

Every year we have new Canadians try out and experience the fun times at our thriving club. Here's a series we documented last pre-season called  "pre-season diaries" where some of the new Canadians gave us their thoughts on trying the sport through our club for the first time.  Meet Sean Freedman, Patrick Bossey and Gary Conlon.

If you are interested, our first session will be "Meet the Coach Night", a pre-season outdoor run on@ 8 p.m. , Jan.3 2013 @ Sports Centre Cafe on St.Clair Avenue (followed by a few beers).

Here are some key points about the league and The Toronto Dingos Football Club.

* Season runs from April to September.
* There is a club season MVP and awards night.
* Opportunity exists to play for your country in Aussies Rules with Team Canada.
* Dingo Football Club trips in the past have included Cuba, Boston, Montreal, Cleveland, Buffalo-Niagara and Pittsburgh.
* The Dingos host the best and only Aussie Rules Grand Final Party in the city that attracts 400 people.
* During the season training is Tuesdays and Thursdays, games are on Saturdays.