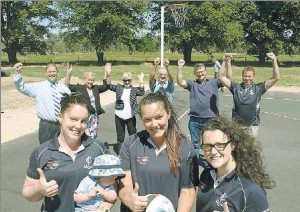 New netball change rooms, public toilets, an accessible toilet and umpire change rooms will be built with the money.

And the people most excited about the development are Greta netballers.

Ash Tanner, Lindsey Humphries and Em Naish were at the funding announcement and couldn’t be happier.

They said they were looking forward to having somewhere to get changed and to have a new toilet.

“It’ll be good to have a toilet that doesn’t have spiders, frogs and ant hills in it,” Ms Tanner said.

“We usually come to games already changed (into netball gear).

“Away teams generally come changed or cram into the tiny change room we’ve got – which is also used for storage.”

Tim McCurdy (MLA, Murray Valley) announced the $50,000 in government funding for the project, which has come through the Local Facilities for Local Clubs program.

He said the cash and in kind contribution from the user groups – of up to $70,000 was one of the biggest he’d seen for a project.

“The Greta community has really got behind this and have said we’re prepared to put our money where our mouth is,” Mr McCurdy said.

“The project will provide improved amenities and will enhance the club’s ability to host finals matches and provide a facility for community use.”

Council will also chip in $25,000 to the project and chair of administrators Ailsa Fox said it was great that yet another Ovens and King ground would be the recipient of an upgrade.

Secretary of the Greta Sports Complex, Tony Tanner, said the extension to the complex was the next step in the master plan for the complex.