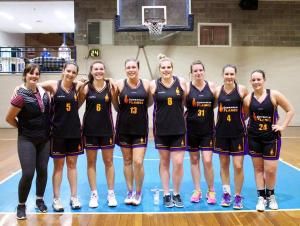 Congratulations to the Flames Black team on winning the A Grade Women's competition for the 2015/16 Summer Season.

Flames Black were in control of the game never dropping the lead. The girls played a very strong defensive game to keep Wests out of the key. Shooting well from the perimeter and running a great transition game, they went on to be claimed CHAMPIONS for the third straight season.