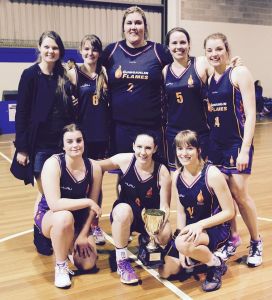 The 2015 Winter Season saw GFBC enter 2 A Grade Womens Teams with our Premier 2 Womens group not able to particpate in Premier 2 Comeptition due to club structure changes wihtin BACT which meant as a club we werent eligable to nominate a team for the premier division.

The Girls though dissapointed stuck together and played the season out in the A grade comeptition coming out grand final winners in thier last game on Thursday 24th September.

Despite all the injuries and disruptions to the season, everyone came together and pulled out a fantastic team win in the Grand Final.

The team will now go on to compete in the BACT's Summer Opens Competitions Beginning in October. GOODLUCK!

GFBC will again nominate 2 A Grade Womens teams in the 2014/15 Summer Season set to begin in a few weeks time in October and run through to April 2016. Goodluck to both teams in the A grade comeptition next season could we get a Flames v Flames grand final in 2016?!