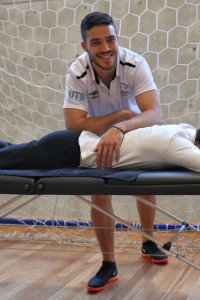 For the 2017-18 season, UTS Northside Futsal Club is pleased to announce that we are fortunate to have secured the services of Rob Speranza of SPINAL & SPORTS CARE as game-day physio, so see Rob to help with those niggling aches & strains except during the Open Men's game when you will find him on court.

When not at UTS Northside Futsal Club you can find Rob at SPINAL & SPORTS CARE, a well-established business based in Parramatta, Sydney since 1977 who pride themselves on providing the most effective evidence based treatment option for your injury.

Rob is a motivated & enthusiastic Physiotherapist whom has graduated with a Masters of Physiotherapy Degree from Sydney University, after completing his Undergraduate Degree in Exercise & Sports Science at ACU. Rob has a background in football, playing in the NSW NPL Mens 1 Competition for Blacktown City FC, having played 1st grade football for over 7 years. Rob is also heavily involved with the coaching of upcoming soccer talent for a well respected football academy, based in the Hills District.

Rob has a particular interest in sports injuries, and their rehabilitation to sport... go see Rob next game-day.