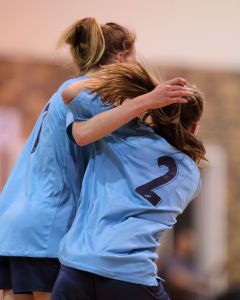 What a great day of Futsal out at Valentine Park in our Round 2 clash with Inner West Magic. Thanks to our ‘young guns’ we finished the day with more championship points than Magic, which is a feat that is rare indeed. The day started with the Academy and Development League (DL) Girls playing on side by side small courts, followed by the opportunity for the DL Boys to play on a full-size court which although a great experience, it's not a configuration that they have previously trained on but still, smiley and exhausted faces all round.

During the course of the day it was great to see the enthusiasm and energy expressed on the court from all the teams, with everyone giving 100%, which is exactly what is needed each and every week if we are to cement our position in the top tier… “every week our very best”.

Although on the day, we took 15 points to Magic’s 12, which in itself is a fantastic achievement, on reflection, it’s about what might have been? If only the Open Women had played to their full potential and if only the Open Men could have capitalised on their 3-0 half time lead, it could have been a spectacular day…. maybe next week?

One thing Matteo (Mr Magic himslef) mentioned after the men's game, was that it is only the second time in 3 years that IWM has  lost a head to head across the whole day. This is definitely a fantastic achievement for UTS NFC against the nine (yes... 9) times club champions.

Some photos from game day are available at www.not24get.smugmug.com ... enjoy