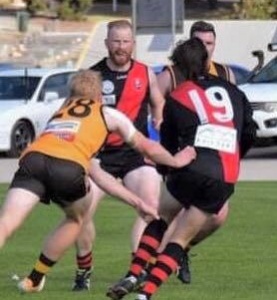 Congratulations to Bob Wynwood on reaching the 200 game milestone for the Yeoman Football Club!

At 2:10pm today, his boots will be laced, his legs will be warm, he will be mentally prepared and Robert Wynwood will be taking to the field in the red sash for the 200th time!

Robert, better known as Bob, started his playing career with Yeoman as a 14 year old playing in the under 17’s competition. During this time he progressed to being the captain, however one could say that Bob has been involved with the Yeoman Football Club - since his birth in 1989 - as a third generation Robin. If you are to look around the club rooms at some of the premiership photos, you will see a very young Bob Wynwood sitting in the front row as the team mascot.

As time went by Bob worked his way through the reserves and in to senior football with Yeoman, serving as captain on multiple occasions. However his contribution to the club was not limited to what he did on the grass. Bob over the years has been heavily involved off field, serving as a member of the committee and organising countless raffles and functions.

Bob’s commitment to the Yeoman Football Club saw him earn himself a life membership in 2014 at the age of 25, this is an outstanding achievement!

Bob via his number 19 long sleeve jumper is famous for being a silky left footer who can navigate through heavy traffic - which can only be described as magical with his bobbing, weaving and evasive side steps (you will see an example of this in the photo above).

Although Bob has not had a lot of finals success throughout his journey, he has stayed loyal to the black and red even when it would have been difficult to do so and has gained many memories and friendships during his time - picking up a senior Best and Fairest and being able to play alongside his father Peter on one occasion, all memories to which I’m sure he cherishes.

Below you will see some testimonials from some of Bob's past coaches at Yeoman,

“Robert Wynwood, congrats mate on the 200 club games .You were a pleasure to coach always giving 100% on and off the field , a side step to die for and strong left foot to get you out of trouble .
It is a testament to you as a person, with hard work and a little luck, you get a chance to play on that last day in September”
Cameron Lockett, Yeoman Senior Coach 2012, 2013 & 2014.
“Silky, skilled, elusive and loyal, those are the easy observations one could make about why Bob Wynwood is the great player he has been for Yeoman across 200 games. However, it is who Bob is and what he stands for as a clubman and teammate that has makes him a legendary player of the Yeoman Football Club. Toughness, humility and humbleness sum up this champion player and bloke.
To the players celebrating this momentous occasion with Bob, If you find yourself looking for a bit of inspiration today simply take a look across the ground at the bloke wearing the number 19 guernsey. Adopt those same traits in the way you act today and I’m certain you’ll be able to honor this champion of the Yeoman Football Club the right way by bringing home the 4 points.
Robert ‘Bob’ Wynwood - 200 of the best and personally wishing all the best to my former player, teammate and now great mate”
Emmett Davidson, Yeoman Senior Coach 2015 & 2016.
“I was lucky enough to be involved in Bob’s career for only a few years, but in that time I met not only a great person/clubman but also a very talented player. Bob really lead by example and was a part of the first signed and at training once I joined the club, and really rallied past players to get along to bring the best future possible.
On the field I’m still yet to this day to decide what Bob’s best position is as he played back forward and midfield, and impacted the game immensely in whichever that was!
Bob really brings pride to the Wynwood name at Yeoman; no doubt His family is super proud of his achievements.
Congratulations on 200 Bobby, wish I was there to watch you get the 4 points against Yolla”
Thomas Mitchell, Yeoman Senior Coach 2017 & 2018.
For me, Robert has a big heart, he does not shy away as a player and as a leader he is more than you see.

When I first joined the Yeoman Football Club, Bob was one of many who welcomed me to the club and made me feel right at home very early and ever since I have admired the standard of person that he is, not only on the football field or around the club but also as a devoted husband and father.

My good mate, congratulations on your 200th game, here is to many more to come, more crocodile claps and fires on the hill (those closest to Bob will know what I mean), everyone is proud of everything you have achieved.

You were meant to be here, you deserve to be here, this moment, this day is yours, enjoy it!