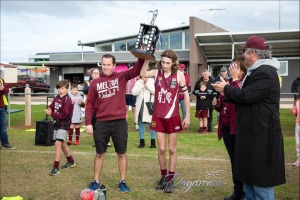 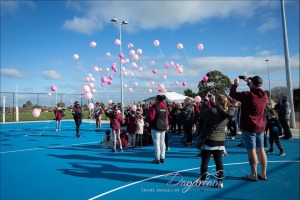 Wow - what a wonderful day we had today, full house to watch the Leigh Clark and Nadine Webber Memorial games. Proud to say our club was successful winning both games this year. It was the first time we have won the Nadine Webber netball shield, made more special with Nadine’s daughter Isla named best on court. Ben Grambau was named best on ground for the Leigh Clark game and as captain accepted the perpetual trophy with head coach Glen McAlpine (previous team mate of Leigh Clark)

We also had the privilege of hearing from Jake Edwards, ex bloods junior and AFL player now CEO and founder of Outside the Locker Room.

And let’s not forget our future stars playing in a U9 grid game against Melton South during the halftime break of the Leigh Clark game. Didn’t they have fun!

I wanted to say thank you to our hard working committee, these days cannot run themselves so well done to those that helped. Special thanks to Sue Balloons for the pink balloons for the Nadine Webber tribute.

Major Sponsor of the Melton Junior Football Netball Club in 2017