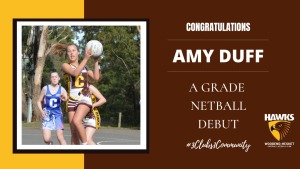 Young gun Amy Duff makes her A Grade Netball debut against Diggers Rest this weekend.
Amy has come through the junior grades starting in the 11/u’s to transition into the senior club at just 15 years of age playing in both the junior and senior teams to play in over 150 games for the Hawks.
Being a premiership & representative player, she loves the big games, taking home the flag in the 13/u, 15/u and 17/u grades and has made the RDFNL and MRNA representative netball teams many times over the years.
This year Amy is a key midcourt player in our 19/u & B Grade teams and was selected in the RDFNL 19/u Interleague team.
She plays a smart, reliable and dynamic brand of netball in the centre and wing attack positions and we are likely to see her strong drives and confident feeds into the A Grade shooters tomorrow.
Congratulations Amy, the club wishes you all the best for your A Grade debut.