ROUND 18 PREVIEW | B Grade Netball 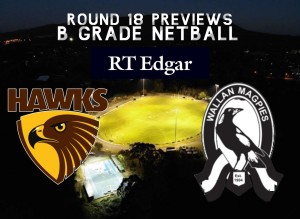 Talking point
Woodend/Hesket has become stronger in performance and are sure to improve on their last game against Wallan.
Previous round
Woodend-Hesket: Woodend had a slow start in their game against Diggers Rest, who played an effective mid court press in the first half. Woodend’s performance improved in the second half, however, Diggers Rest was too far ahead on the score board for Woodend to come back.

Wallan: Wallan played Riddells Creek and had an exciting close game, only loosing by two points.

Why are they going to win
Woodend-Hesket: will be working on getting their fourth win for the season. This was one of their team goals. If all players keep that in mind, this team will have success.

Wallan: is sitting fifth and will be striving to finish off the season with a win.

Who is going to win
Wallan will come out physically and verbally strong. Their mid court press will be showcased within the first couple of minutes. Woodend-Hesket will need to play smart and increase their work rate to compete . Wallan to win.