ROUND 17 REVIEWS | B Grade Netball 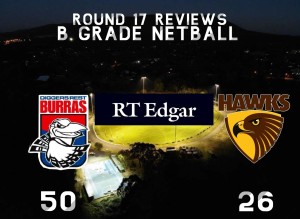 Being the third game of the day held, the B grade Woodend netball team had interesting weather conditions for the game at Diggers Rest.

At the beginning of the game, it was wet underfoot due to the rain and by the final quarter the game picked up speed as the rain had stopped.  From the onset, Diggers Rest played a mid court press that shut down space for Woodend to make leads and throw successful passes.

With the temperature being extremely cold, it took the first quarter for Woodend to apply their learnt skills of the season.
Bonnie and Emily worked hard against physically strong defenders. In the second half of the game, bringing Bonnie out to GA and Emily into GS resulted in more productive play and goals being scored.

Chelsea had an equally challenging game with a WD that matched her with height and strength. Her first lead was often covered and so she was required to keep making second leads, this made her work load high.

Amy Duff, our youngest player in the side, also had a huge job. Amy was matched up against a player that was equally as fast.

Both these players outplayed each other and also had success feeding the ball into their own shooters.
In the back line, Tegan had an interesting game. Her WA was slightly bigger, however this did not prevent her from defending her first lead and second. After her defending job was completed she was offering leads down court.

Taylor Bowen had a big job as the work she did out side the ring, helped slow down the GA. It was in the second quarter, where she picked up her work load another level and prevented the GA from getting clean passes and also positioning in the circle. By half time, this player was benched and a new GA was brought on for Diggers Rest.

Mel Wilson only returned to the court last round, played the entire game as GK. Both shooters that she played against matched her height. At times she was successful taking clear interceptions and rebounds from missed shots which resulted with the ball being sent down into the attacking end.

Digger Rest took the win this round. Each player in the B grade Woodend-Hesket team tried really hard against highly skilled players. This team has worked hard throughout the season, with signs of player and team improvement, but there is still more work to be done for further improvement.