ROUND 17 PREVIEWS | B Grade Netball 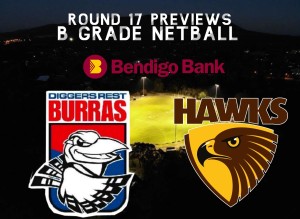 Talking point
Having won three games for the season and with the B grade teams’ aim to win four, this could be the one, as the B grade team only lost to Diggers Rest by six goals earlier in the 2019 season.

Previous round
Woodend-Hesket: A challenging game against Romsey, with Romsey taking the win due to the height of their GS and well placed passes into her. The B grade team did not settle, with positional changes the team performance improved as the game progressed. It is working harder mentally and physically to keep possession of the ball.
Diggers Rest: had a bye the previous round, however, the game they played two weeks ago against Macedon resulted in a win for Macedon.

Why are going to win:
Woodend-Hesket: With the players desire to earn another win for the season, it is going to come out hard, fighting for every ball and scoring those much needed goals.
Diggers Rest: Having lost to Macedon, they will want this win to redeem their confidence.

Who is going to win:
This is going to a good game, as Diggers is sitting fifth, they possibly could take the win, however, the Hawks have improved and with the weather conditions, there just maybe an upset.