ROUND 12 REVIEWS | B Grade Netball 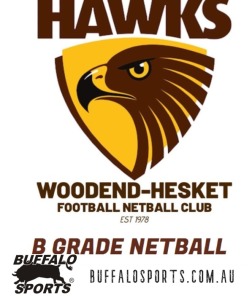 Last week’s game certainly helped our B grade team against Melton Centrals. The wet court helped our team to play a controlled game.

With Emily and Rylee playing GS and GA, the movement in the circle created space for Amy Duff to deliver the ball successfully into the shooters. With Chelsie holding the centre position, she linked the backline into the attacking end.

The Hawks trailed by one-goal at quarter time and continued with the same line-up in the second quarter.

The competition between us and Centrals was even, however errors slowly began creeping into our game. Centrals led by five-goals at half-time.

We were still in this game, however, a change had to be made. Claire Klusik moved into GA. With physical presence, she matched Centrals' GD.

Tegan moved into centre to match the speed of Centrals' centre which also increased our speed in the attacking end, while Chelsie picked up the WD position.

Bonnie and Taylor continued to out position the Melton’s shooters. We won the quarter and were now only three goals down heading into the final quarter.

We went in with the same line up that we started with to finish the job and try to take a win. All players worked hard in keeping possession of the ball, by continually making forward leads onto the ball.

Bonnie and Taylor held their three feet distance which caused visual pressure on Melton’s shooters, which resulted in our Woodend defenders rebounding. Tegan and Amy kept working bringing the ball onto the circle with Emily and Claire scoring goals.

Round three of this season, the B Grade team played Centrals and lost by 21-goals, nine weeks later Centrals took this win by only eight goals!

This Hawks team, this team of players are getting better. With more time together, practicing the skill components,  structure of set plays and believing in themselves and as a team, wins will come, its only a matter of time and commitment of everyone.

Well done ladies, a clean performance with minimal errors, a good foundation for us to build on. Go Hawks!