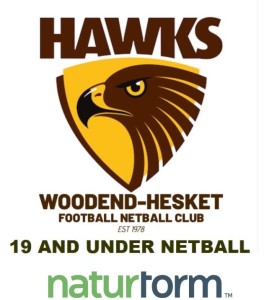 The 19’s girls were up against the unbeaten titans of the premier underage competition, Rupertswood. Without tall key shooter, they knew that the task was going to be tough one.

The young Hawks struggled to find their way in the first quarter as Rupo got the early jump to lead by 10-goals at the first change.

Entry into goals was proving difficult as the Rupo defenders closed down space, while entry into Rupo’s attacking end was quick and free-flowing.

Jess combined with Shae Denahy to slow the ball and give the Rupo feeders more to think about as the girls worked to confuse the space in the second quarter.

The Hawks continued to struggle to find connections in the attacking end with too much hesitation on the ball release and too many throw away balls.

Emma Cogger was brought back on court part way through the second quarter to team up with Sarah in an effort to open up the goal circle and provide two quick moving smalls against the tall defence.

A mid-court shuffle also took place as Kate Mahon was brought into the WD position, Macca into centre and Amy shifted into WA. Abbey and Jess worked well in defence creating some turnover ball. This combination worked.

The Hawks drew the third quarter with Rupo at seven goals apiece at the final break. Their shooters capitalised on the opportunities, only missing one goal for the quarter.

The fourth quarter had the Hawks continue their third quarter efforts across the court by putting up one more scoring shot than Rupo. Even though the game had already been lost in the first half, the girls kept their heads high and continued to work together to improve and stem the Rupo attack.

Sarah was a standout in the attacking end scoring 10 of our 18 goals at 83-percent accuracy under extremely heavy and aggressive defensive pressure, often double teamed and having to pick herself up off the ground after heavy impact on a number of occasions.

Jess Thorne was the standout in the defensive end, using her tall frame to secure the rebounds, confuse the space and force turnovers and Mackenzie Brown was once again solid in the mid-court, opening up the court and putting well placed passes into the shooters in the second half.

It is a credit to the entire team of players that they continued to fight hard. The improvement as the game wore on was obvious and the team look forward to starting with the same second half intensity, knowledge and form in their next game. Go Hawks.