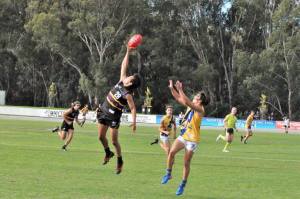 The Murray Bushrangers have announced their TAC Cup Under 18 Squad for 2018.

Talent Manager Mick Wilson explained the selection process began last season. “Clubs nominated their payers from the under16, 17 and 18 competitions in June 2017 and since then there’s been 27 training sessions, three intraclub and one TAC Cup practice match. The series of training sessions, trial games and athletic tests have allowed the coaching staff to select the players they believe are best suited to perform well at TAC Cup level”

The squad is represented by 22 clubs across the Goulburn Murray, North East and Southern NSW regions. “We really value the incredible support from junior and senior clubs across the whole region. These volunteers and coaches are so essential in providing a platform for young players to develop as quality people and also to pursue an elite AFLpathway” Wilson also explained the high quality number of players who missed selection. “The selection process is very subjective and there are many examples ofplayers such as Steve Johnson who missed stages of Murray Bushrangers selection. We just encourage those boys to continue their dedication and commitment to playing well for their home club”

Bushrangers Coach Leon Higgins also highlighted the rigorous selection process. “It was a very tough selection process and whist there were some disappointed players, each of these players are well prepared for the upcoming season where we will continue to monitor their development. History suggests that a number of these players will develop and come into squads either throughout the season or in coming years”

The Murray Bushrangers launch their 2018 Season against Gippsland Power in Round 1 at Punt Road on Sunday March 25.