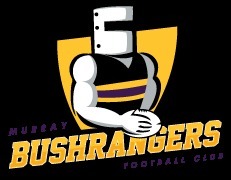 The Murray Bushrangers have announced their pre-season squad for the upcoming 2016 TAC CUP Pre-Season. Over 60 Talented Footballers form across the region will commence training on Sunday 15 November at the Wangaratta Sports Development Centre.

Talent Manager Lee Fraser explained the rigorous process in selecting the squad “The North East Border & Goulburn Murray V-Line programs have provided an outstanding platform for our talented players throughout 2015. The Club has also been able to identify players through the V-Line carnival, interleague carnivals,  trial games, local football and fitness testing.

“Each of these young men have a fantastic opportunity to develop both their football, fitness & also personal development as they confront a variety of challenges across the 4 month pre-season phase”. “As a Football Club we are fully aware that it takes extraordinary commitment from players and their families to participate in the program, we look forward to seeing each player improve through hard work and perseverance”.

“Whilst there will be a number of players disappointed not to make the squad, we encourage all of them to continue to work hard on their fitness and skill level , we will continue to monitor their progress at local level. History suggests that a number of these players will develop and come into squads either throughout the season or in coming years”

The Murray Bushrangers Pre-Season is represented by 32 clubs across 8 leagues demonstrating the contribution made by volunteers and coaches throughout the region.  “As a club we understand the role that local clubs  play in producing talent, we are lucky that so many of these players have great mentors and role models within their local communities”

The Pre-Season will commence on Sunday 22 November at the Wangaratta Showgrounds.