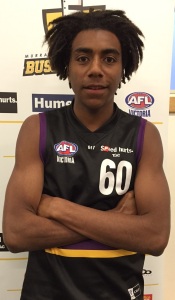 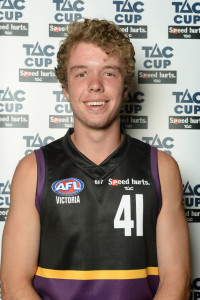 The Murray Bushrangers will debut four players when they take on the Geelong Falcons at Highgate Recreation Reserve in Craigieburn.

On the back of 10 players committed to the Under 18 National Carnival and with Nick Coughlan once again elevated to play with the Footscray VFL side this week provides a great opportunity for a number of the clubs ‘bottom age’ players.

Lachlan Waite (Seymour) – Played with Vic Country in the Under 16 National Championships in 2014. Has developed well throughout the year, has the ability to play defence or as a lead up forward. Great set of hands who reads the play really well.

Billy Cooper (Shepparton East) – Has graduated through the AFL VICTORIA Lagunta’s program where his skill and athleticism has shone through. Reads the play superbly and has developed into a player who can rebound from defence or provide an attacking option in the front half.

Esava Ratugolea (Cobram) – Has impressed his coaches at Cobram with his extraordinary athleticism and ability to impact the marking contest. Is one of the quickest players on the list and at 195 centimetres can play as a forward marking option or in the ruck.

Ethan Boxall (Chiltern / Wodonga Raider) – Moved to the Wodonga Raiders this year and has played some good senior football under the leadership of Darren Creswell. Slightly built but very courageous, reads the play well and has the ability to hit the scoreboard with his left foot.

Other players to return to the side this week include Luke Smith (Congupna), Jake Page (Albury), Ned Nihill (Nathalia) and Fletcher Carroll (Albury).

With eight changes to last week’s side that were defeated by top of the ladder North Ballarat Rebels coach Darren Ogier is excited by this week’s challenge. “A great part of our program is that so many talented young footballers get the opportunity at the level, as a coaching group we are extremely excited by what this week may bring”. “All boys have been training hard and learning our systems, provided each players plays their role and supports each other we will get the result we are after”

This week’s game is at Highgate Recreation Reserve in Craigieburn and begins at 12.00pm.

MURRAY BUSHRANGERS LINE UP ROUND 10 vs GEELONG FALCONS