Rebels in Thriller Over Bushrangers 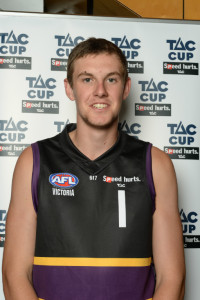 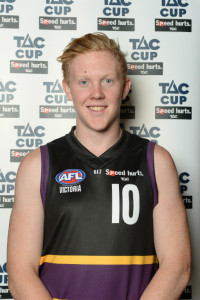 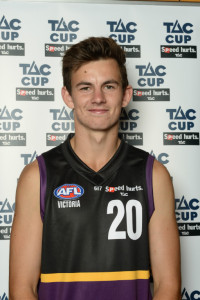 The Murray Bushrangers have gone down to the North Ballarat Rebels by 4 points in the TAC Cup Top of the Table Clash at Highgate Arena in Craigieburn. The Bushrangers fought back from a five goal deficit in the first term to lead at the twenty minute mark of the final term before the a Rebels kick and goal saw the Bushrangers go down by 4 points.

The Bushrangers welcomed two debutants into their team with Wodonga’s Isaac Wallace and Strathmerton’s Louis Pinnuck playing their first games. It was great that former players and now AFL players North Melbourne’s Kayne Turner and Collingwood’s Jack Crisp presented the boys with their jumpers before play.

Kicking against a strong breeze in the first term saw the Murray Boys needing to defend with precision. And although the Murray outfit scored first, it was the Rebels who kicked the first goal after five minutes. The Rebels were able to goal again but the Bushrangers were matching the stoppage efforts through Nick Coughlan and Clayton Oliver.

The Bushrangers were going forward but the Rebels defence was solid. The Rebels led at the first break by 28 points after a successful but inaccurate 4 goals 6 behinds for the term.

The second term started well for the Bushrangers with Zach Sproule kicking the opening goal of the second term, and then Josh Minogue kicked the Murray Boys second goal. Sproule was finding space to lead into and taking great marks both contested and uncontested. Ruckman Mitch King dominated for the Bushrangers and provided the midfield with a plethora of possessions. Jae Marshall was having a huge impact, while Isaac Wallace was laying some great tackle and Louis Pinnuck gathered a number of crucial possessions. A goal after the half time siren by Sproule saw the Bushrangers take the lead at half time.

With North Ballarat again kicking with the handy breeze the Bushrangers were able to extend their lead to 12 points after seven minutes of play. However the Rebels kicked long with the wind and with lucky bounces were able to secure the lead and kick away. Josh Minogue was determined to fight back and kicked a long goal to reduce the margin to just 5 points.

At the last break, the Bushrangers trailed by 5 points and the breeze seemed to decrease to the end the Bushrangers would be kicking in the final term. In a tense final term, the Rebels went forward scoring a behind to extend their lead to 11 points. An enormous amount of pressure was being applied which kept the football on Grandstand Wing for extended period of time and with just seven minutes remaining Trent McMullan kicked a beautiful goal and Minogue followed with another to give the Murray team a 1 point lead.

With just seconds remaining in a very short quarter, North Ballarat kicked a goal and win the Top of the Table contest by 4 points.

After the game Coach Darren Ogier was disappointed with the last few minutes of the game however highlighted that with full effort from the group the Murray Bushrangers can match it with the competitions best.