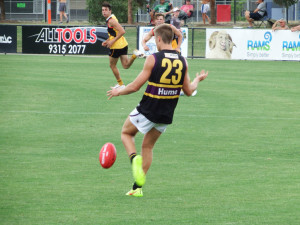 The Murray Bushrangers will be looking to rebound after losing their last two games of the TAC CUP Season. The challenges don’t get any easier with the Bushrangers heading to Ram’s Arena in Craigieburn on Saturday to take on perennial powerhouse the Calder Cannons.

TAC CUP coach Darren Ogier whilst disappointed with the last two weeks remains positive that the team is heading in the right direction. “The boys have been given a real lesson in work-rate through the middle of the ground; both North Ballarat & Oakleigh ran harder for longer which directly influenced the result of the game”.

“The positive is that the boys now realise what is expected each week to be a good side in this competition, we need to improve and that has to start this weekend against the Calder Cannons’

Nathalia’s Ned Nihill will make his TAC CUP debut following some outstanding form in the Murray Football League. “Ned deserves his opportunity he is a developing tall defender who has been impressive throughout the pre-season. A former Victorian Country player Ned has benefited greatly by playing senior football with the Nathalia Football Club. Ned competes hard, reads the play and uses the ball really well”

Also returning to the side are Fletcher Carroll (Albury), Alex Tattersall (Mooroopna) and Lachie Leeds (Jerilderee) while AFL ACADEMY power forward Josh Schache (Seymour) will play his first game for the Bushrangers since kicking 7 goals in round 1.

The game will be played at Ram’s Arena in Craigieburn at 1.00pm this Saturday afternoon.

MURRAY BUSHRANGERS LINE UP ROUND 6 vs Calder Cannons