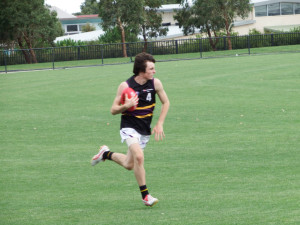 The Murray Bushrangers have nine players named in the Victorian Country Academy Squad that will play a trial game against New South Wales / ACT and Queensland this Sunday 19 April at IKON PARK in Melbourne.

Talent Manager Lee Fraser said that all players selected in the squad have displayed good form in the early part of the season and deserve their place in the squad. “This is great recognition for our players, our staff and importantly our local clubs who continue to provide talent footballers across the region’.

“Whilst there is a long way to go in terms of making the final squad, participation in the Victorian Country Academy provides the players a great insight into what is required at the next level’.

The Bushrangers named in the squad include;

Josh Schache – (Seymour) – AFL Academy member who played in the National Carnival last season, the power forward kicked 7 goals in TAC CUP round 1 to stamp an early mark on the season.

Murray Waite (Wangaratta) – Has followed up a scintillating 2014 TAC CUP season with strong form through the midfield early in the season.

Wil Brodie (Shepparton Bears) – AFL Academy member who has started the season brilliantly as a powerful inside midfielder, bottom age player who represented Victorian Country at Under 16 level in 2014.

Jy Simpkin (Mooroopna) – Has demonstrated scintillating early season form with dynamic run through the midfield and up forward (8 goals). Represented the Victorian Country squad in the Under 16 National Carnival last season.

Alex Tattersall (Mooroopna) – 200cm ruckman who has returned as a 19 year old this season, competitive ruckman who take a mark when put up forward.

Julius Battista (Shepparton Bears) – Athletic defender who reads the play well, at 189cm has the ability to play through the midfield.

Clayton Oliver (Mooroopna)– Damaging g inside midfielder who won the Goulburn Valley rising star award in 2014, super competitive and creative by hand he has started the season in great form.

Luke Smith (Congupna) – Running machine who has great skills across the midfield and up forward, courageous player who has demonstated strong TAC CUP form in 2014 and 2015.

‘This is a great element of our club, the ability to provide players who opportunities to test themselves at a higher level, whether it’s state league football or trialling for state teams’. ‘Whilst this will be an exciting time for all players involved, it will always provide a great challenge’ Fraser said

Any queries relating to the Murray Bushrangers please feel free to contact Talent Manager Lee Fraser on 0402 414 476 or via email lee.fraser@aflvic.com.au;