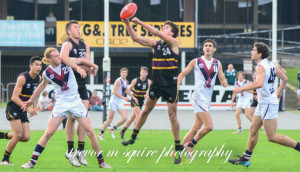 After winning four of their past five games the Murray Bushrangers head into this weekend’s 1st Elimination Final against the Sandringham Dragons in good form and keen to make a mark on the TAC CUP finals series. The Bushrangers enter the knockout final confident after defeating the Dragons by two points earlier in the season.

Coach Darren Ogier was full of praise of his teams last two months of football “we really put it back to the playing group to take ownership and drive the team into the finals”. “They have continued to improve as a team and a number of players have really stood up to make their mark on the season”.

The players are feeling really confident and are looking forward to having a real impact on the finals series”. “As we know finals are a different game and it provides another opportunity for our playing group to perform on the big stage, when it matters most”

The backline has been solid all season with Tom Holman (Kyabram) a real catalyst for the Bushrangers recent good form. Connor Brown (Waaia) & Marty Brennan have been rebounding superbly with versatile tall men Dougal Howard (Albury) and Mitch Mahady (North Albury) taking on the oppositions key forward each week.

The Bushrangers will be boosted by the return of Dan Howe (Rennie) from VFL duties at the Richmond Football Club, unfortunately Kieran Ellis (Albury) suffered a broken hand playing for Collingwood VFL team and will miss the finals series.

Coach Darren Ogier was confident of a good result this weekend ‘confidence is a great advantage in sport and our group has been in good form, morale is high and it is a great opportunity for each and every player’

This weekend’s game is on Sunday 31 August from 2.15pm at Visy Park in Carlton.