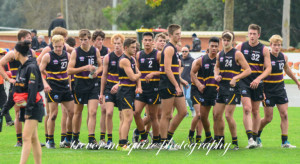 Following last week’s great win over the Eastern Ranges the Bushrangers head into the final round of the TAC CUP in good form and aiming for a strong performance against the 12th placed Bendigo Pioneers. A win this week will secure the Bushrangers a spot in the 2014 TAC CUP finals series.

Coach Darren Ogier praised his the senior players following last week victory, “Our captain Nick Mellington (Benalla) has led superbly in the second half of the season, his appetite for the contest and ball winning ability was a real catalyst last week. Nathan Drummond (Mooroopna) has returned from the VFL with 36 possessions and 13 clearances to ensure we got over the line”

“Brydan Hodgson has also been in great form over the second half of the year dominating the clearances and working hard around the ground. “Mitch Mahady (Nth Albury), Tom Holman (Kyabram) and Dougal Howard (Albury) in the back half have been strong in the air and provided great rebound”

Ogier also commented on the developing youngsters including 16 year old duo Jy Simpkin (Mooroopna) and Will Brodie (Notre Dame) who kicked 6 goals between them last weekend. “This time of the season provides great opportunities with a number of senior boys playing VFL Football we have played a number of bottom age boys who are developing well”

“In his second game Jy Simpkin had 20 possessions and kicked four goals, Will Brodie on debut kicked two goals, attacked the ball well and provided real class in the forward line” ‘We have also generated a lot of run across the ground with Jake Marshall (Deniliquin), Murray Waite (Wangaratta), Levi Middleton (Finley) , Dylan McDonald (Albury) and Luke Smith (Congupna) all working at the required level ”.

Ogier is aware of the Bendigo strengths “We played Bendigo in round 1, it was a high class game and we were lucky to get over the line by 2 goals, they will be very competitive and our boys will need to be at their very best to win”

The Bushrangers will be boosted by the return of North Albury ruckman Isaac Muller from VFL duties and Rutherglen sensation Marty Brennan who returns from injury.

This weekend’s game is on Saturday 23 August from 1.00pm at Epsom Huntly Recreation Reserve in Bendigo.