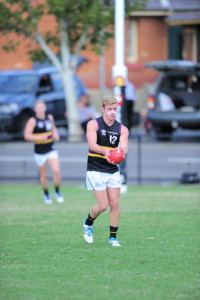 Murray Bushrangers Talent Manager Lee Fraser said it was great reward for both Mennen and Mellington whose form has progressed throughout the course of the season. “It would be fair to say that both boys had a slow start to the TAC Cup season; however they have continued to improve and work on specific areas of their game with the coaching and fitness staff”.

‘David Mennen has returned from his two games in the National Carnival with an awareness of what is required at the next level, the same could be said for Nick Mellington who has experienced VFL football earlier in the season and been in great form since’.

This announcement brings a total of 8 Murray Bushrangers who have been invited into draft combines at the end of the season, The following players were invited into the National Combine which will take place at Etihad Stadium from 30 September – October 3.

“This is a great outcome for the club and in particular the staff who put so much time and effort in creating a professional environment for the players’. ‘It is also great acknowledgement for our local clubs and leagues throughout the North East & Goulburn Murray’.

Fraser highlighted that there is a long way to go for each of the players, ‘History suggests that players invited to Draft Combine don’t necessarily get drafted and those who haven’t received an invitation have had their name called out on draft day’. “Whilst it is a great acknowledgement for all of these boys they remain motivated to impact the remainder of the season as the Bushrangers push for a berth in the TAC CUP finals series’