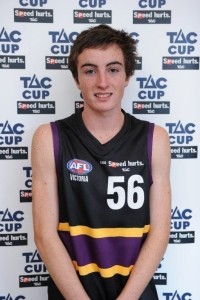 The squad provides an induction into the 2015 Vic Country under 18 Academy and will provide a great insight into what is required at the next level. Talent Manager Lee Fraser described the program, “The Under 17 academy is another opportunity for talented footballers within our region to experience an elite environment; the academy assembles the most talented footballers throughout Country Victoria. It is tremendous that members of the Bushrangers squad can gain this experience”

Fraser commented on each player selected

Murray Waite (Wangaratta Magpies) – ‘Murray has been a real standout in his first year in the program, he has continued to elevate his game through the middle of the ground with enormous work rate and ability on the ball’.

Ryley Sharp (Myrtleford) – ‘Ryley has continued to develop through both the Bushrangers and Myrtleford senior program, a strong bodies ruck-man who reads the play well it is great to see Ryle get this opportunity’.

Brady Sharp (Myrtleford) – ‘Similar to his twin brother Brady has shone at both O&M senior level and in his TAC Cup games, a reliable strong defender Brady has a promising future with the Bushrangers’

Luke Smith (Congupna) – ‘Following injury and illness in the early part of the season Luke played his first game on the weekend and was great with his attack on the ball and skill level, he capped a great debut by kicking 2 goals. Luke has also played good senior football at Congupna in the Murray League’

Julius Battista (Shepparton Bear) ‘Another Bushranger who has had exposure at senior level with the Shepparton Bear, Julius has great size and athleticism and has had an impact in his games with the Bushrangers in 2014. The added experience in the academy program will be great for his development heading into 2015.

Nate Trotter (Euroa) ‘Nate played in the Under 16 National carnival last year and after an injury interrupted pre-season has improved his fitness base to have a real impact during his Bushranger games this season. Nate has good skills, wins the ball in close and can play down back or through the midfield’.

Michael Reidy (Mooroopna) – ‘Michael is a super athletic with the ability to play in a number of positions on the football field; he has shown great signs in his Bushranger appearances this season and will continue to develop’.

Seymour’s Josh Schache who played in the 2014 National Championships won’t play this weekend however will play a big role in the 2015 Under 18 Academy.