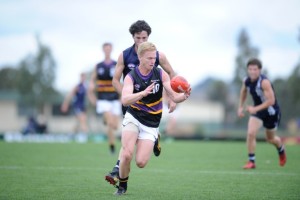 call up to the Richmond VFL team for this weekend. Drummond returned to the Bushrangers in 2014 as a

clubs 19 year old program. “As a club we see it as a key component of the 19 year old season is getting

exposure to the VFL, there is a clear pathway between TAC CUP, VFL and then into the AFL system”.

“Having attended school in Melbourne, this is effectively Nathan’s first full year in our program. Nathan’s

back, Nathan is ready for his VFL opportunity”

opportunity to experience an AFL environment and perform against current listed AFL players.

and AFL clubs. “As a club we work closely with AFL clubs regarding our playing list, the Richmond Football

Club have expressed interest in Nathan playing in their VFL side, the time is now right for Nathan to step

what is a great opportunity to impress recruiters ahead of this year’s National Draft.

Fraser highlighted that there would be more VFL opportunities as the season progressed. ‘Darren Ogier

throughout the remainder of the 2014 season’

receive opportunities later in the season.