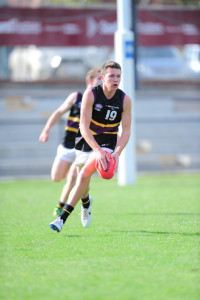 The Murray Bushrangers take on the toughest road trip in the TAC CUP when they travel to Shepley Oval in Dandenong to play against the Dandenong Stingrays.

With up to 14 players unavailable due to Nationals and VFL commitments coach Darren Ogier has been impressed with his young squad. “It has been a really good test of our depth over the last month and all our players have shown really good character and commitment to ensure we have been competitive in each game”.

“I have been impressed with players who are in their first year of the program including Marty Brennan (Rutherglen) and Connor Brown (Waaia) who have really stepped up over the last month of football .

“It has also been pleasing to see game day reward for young men who have been demonstrated great commitment to their training, players Brady and Ryley Sharp, Dion Metzner and Callum Crisp all fit that category”.

This week’s clash with Dandenong promises to be a great contest with only one game separating them on the ladder.

Ogier was confident his senior brigade would continue to provide leadership in this week’s crucial contest. “Tom Holman (Kyabram) has been in great form, David Mennen (Bennalla) has stepped up following his Vic Country commitments and last week’s skipper Jackson Clarke (Wangaratta Magpies) will continue to provide guidance to the group”

“It will be a really good contest against the Stingrays this week, they have a number of quality footballers and they will be hard to beat on their home ground”. “Having said that our form has been really impressive so we go in the clash with a lot of confidence”

Ogier was also pleased to confirm that Lachie Dale will be making his debut with the Murray Bushrangers as 23rd Player. “Lachie has continued to improve throughout the season and his run and speed across the ground will be a great asset for the team this week’.

With the final game of the National Under Championship’s Wednesday afternoon the Bushrangers squad will be training this Thursday night.

The team listed below includes an extended interchange bench, the team will be finallised after training on Thursday.

Any queries feel free to speak with Talen Manager Lee Fraser 0402 414 476 or via email lee.fraser@aflvic.com.au;