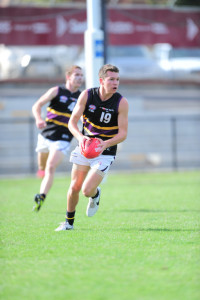 The Murray Bushrangers are looking for a return to form this Sunday when they take on the Northern Knights at Norm Minns Oval in Wangaratta.

Coming off three losses the Bushrangers enter Round 12 of the TAC CUP outside the top 8 and with 7 games remaining in the season a win this weekend will put them right back in the mix.

“Both boys have been playing outstanding senior football, and to be honest their form was simply too good to refuse”.

“Levi is an inside midfielder who can push forward and kick goals, with wet weather predicted his approach at the contest and pressure on the ball carrier will hold him in good stead’.

“Brady Sharp will make his debut a week after twin brother Ryley, Brady has been playing good senior football at Myrtleford and we have seen his confidence rise on the training track’.

Ogier was confident of a good performance against the Knights this week after good signs from his inexperienced chargers in recent weeks. “There have been a number of postiives over the last few weeks with a number of boys experiencing TAC CUP football for the first time”.

“It is likely to be heavy conditions on Sunday and we feel we have the right balance of talls and smalls this week”.

This weekend’s game commences at 1.00pm at Norm Minns Oval on Sunday 29 June.