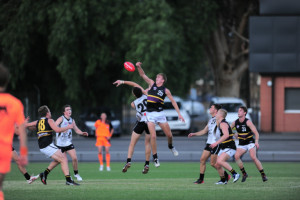 The Murray Bushrangers face a crunch game against fellow finals aspirant the North Ballarat Rebels in Round 10 of the TAC CUP.

Both teams head to Highgate Recreation Reserve in Craigieburn with four wins and will be looking to set up their season with a Victory this weekend.

Despite accounting for North Ballarat in Round 3 Coach Darren Ogier is under no illusions as to the challenge at hand. “The Rebels are the in form team of the competition having won their last four game including an 89 victory over the Sandringham Dragons in their last game”.

“The Rebels are a quality team who have demonstrated in recent weeks that they can match it with anyone in the competition, our boys will need to ensure they are on top of their game this week” Ogier said.

The Bushrangers welcome back Victorian Country representative Josh Schache (Seymour) who will play a key forward and spend time in the ruck. Brydon Hodgson returns to the midfield fresh off a 3 goal performance for Lavington in last weekends win over Yarrawonga.

Young developing utility Julius Battista will make his debut for the Bushrangers following good form for the Shepparton Bears in the Goulburn Valley Football League. Ogier was full of praise for the youngster “Julius is a good size and has demonstrated good versatility with Shepparton Bears in recent weeks”.

The Bushrangers have shown good form in recent weeks and will go into this weekend’s game full of confidence. ‘The boys should be up for the challenge, a place in the top 8 is up for grabs and as they say it is an old fashioned 8 point game” Ogier said.

The game starts at 1.30pm at Highgate Recreation Reserve and will be broadcast live on TAC CUP radio which can be found via the Red Time sport app free to download from the ITunes store or via the link on www.taccup.com.au