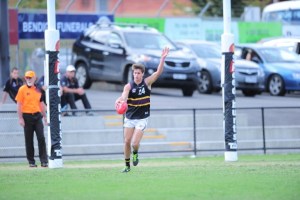 Four Murray Bushrangers have been named to represent the Victorian Country team in Round 2 of the 2014 National Carnival this weekend.

Benalla’s Caleb Marchbank was outstanding in round 1 of the carnival where he roamed across half back playing a vital role in Vic Country upset win over the Vic Metro. Following 14 months off with injury Marchbank has started his 2014 campaign in scintillating form with the Bushrangers and will play a critical role in defense this weekend.

Dan Howe (Rennie) has come returned to the Bushrangers as a 19 year old after completing his schooling in Melbourne. Howe has been a general across half back for the Bushrangers playing on a range of opponents whilst gaining numerous possessions. His poise under pressure and flexibility to go into the midfield will hold him in good stead in his first game for Victorian Country.

David Mennen (Benalla) has demonstrated excellent form for the Bushrangers in 2014, he has also impressed in Vic Country trial games through the wing and at times half back. Mennen will provide pace and superb skills to the Vic Country midfield when he makes his debut on the weekend.

After an outstanding Under 16 carnival in 2014, youngster Josh Schache (Seymour) makes his Under 18 Nationals debut this weekend. A member of the AIS Academy program Josh is a 197cm key forward whose is coming off a 4 goal performance last week against the Sandringham Dragons. Josh will play an important role as a key forward and will at times move into the ruck.

On Behalf of the Murray Bushrangers and the football community across the region we wish all these boys the best of luck against South Australia this Saturday.