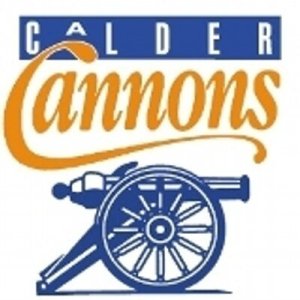 Podhajski kicked three of Calder’s eight goals in the last term, hauling his side to its sixth win of the campaign.

“He has really transitioned perfectly in to the midfield this year and after an exceptional game last week he took it to another level.

“It is his leadership and ability to step up in the big moments that separates him from the pack.”

Overlooked in last year’s national and rookie drafts after testing at the combine, Podhajski has made a seamless transition from a key defensive post to midfield this year.

The Greenvale and Aberfeldie junior has averaged 25 possessions, six marks and eight tackles per game, thrusting himself onto the radar of AFL clubs again.

He had 30 disposals, 10 marks and 12 tackles against Greater Western Victoria Rebels in Round 8, another performance which is likely to attract votes despite Calder going down by 10 points.

Hands up if you were best afield on Sunday. Mitch Podhajski celebrates a goal for Calder Cannons. Picture: Mark Dadswell

Podhajski, who is 191cm, has been named in the Cannons’ best players in eight of his 10 TAC Cup games this year and has kicked 19 goals to sit equal fifth on the competition’s goalkicking chart.

Despite featuring in seven VFL games for Coburg, Podhajski has mounted a strong case to join the likes of Jack Higgins, Hugh McCluggage, Clayton Oliver and Dyson Heppell as winners of the award.

One regular TAC Cup watcher says Podhajski should be ‘in the top few names’ in the vote count.

Lachie Sholl had 31 disposals for Calder in its win over Murray Bushrangers. Picture: David Smith

Lachie Sholl, who has been invited to the AFL national draft combine, also shone with 31 disposals against the Bushrangers.

Brodie Newman, Patrick Mahoney, Curtis Taylor and Lucas Cavallaro were other players who figured in the best.

With two games to play against Eastern Ranges and Geelong Falcons before a wildcard playoff, Calder is seventh and likely to face either the Falcons or Rebels to earn a berth in the finals proper.

Only the top-four teams are guaranteed a finals berth under the wildcard system, which has been introduced this year.