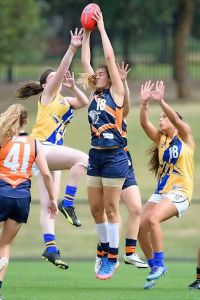 CALDER Cannons ruck Carla Rendelmann might have always seen netball as her number one sport, but when the opportunity arose to join her family in Australian Rules, she jumped at the opportunity. She has not stopped jumping since, playing a vital role in the ruck for the Cannons in the TAC Cup Girls and Vic Metro in the AFL Women’s Under 18 Championships.

“My brothers always played, and dad was in the VFL,” she said. “So I began in the first Aberfeldie Football Club girls team probably three years ago and that’s pretty much where I started. “After the first year of playing footy I got scouted to Cannons and I played last year with them and I was lucky enough to be invited back this year.”

After the Calder Cannons finished unbeaten on top of the TAC Cup Girls ladder in 2017, they dropped back to the pack, with plenty of younger prospects shining through setting them up for future years.

“I throughly enjoyed both years,” she said. “Last year we obviously came up on top. “This year was a little different, having a lot of girls bottom-aged but it was all just about development and having the opportunity to be their role model so it was a lot different, but really exciting.”

Rendelmann supported the longer season because she had more time to develop and more time spent with her teammates.

“I enjoyed it,” Rendelmann said. “I think every week personally I developed a lot better. “I was just playing good football and it was good to see the team coming together every week.”

She admits the initial jump to the TAC Cup Girls last season caught her off guard, but by 2018, she was settled into the pace and standard of the competition.

“I think definitely I took a step back and it was like just a jump for me,” Rendelmann admitted. “But this year I’m actually going and impacting the contest and being able to actually make a difference in the game which has just really helped.”

Rendelmann was picked among the 24-player squad to head to the Gold Coast, playing two games and performing well in the ruck.

“I’m loving it,” she said pre-AFL Women’s Under 18 Championships. “I’m loving having this opportunity this year and I can’t wait to see what I can bring to the team. “Hopefully if I make the Gold Coast squad, I can’t wait to show what I have and show how much I’ve developed throughout the season. “I just hope I come out on top.”

She ticked that box and continues to tick boxes at senior level, juggling a challenging workload between school and football.

“I’m in Year 12 at the moment so I have a lot of school work,” Rendelmann said. “I have Essendon VFLW training twice a week and I also head down to my local club and help them out and obviously I have my own gym sessions and kicking the footy with my dad so it’s pretty full on every week. “Then trying to balance school with it all, so it’s just finding that balance and just working it out.”

Rendelmann has been pleased with her output in her preferred position of ruck, seeing her competitiveness as a strength.

“Being able to compete at the contest and having that vertical jump and being able to impact around the ground (is a strength),” she said. “My marks have been getting a lot stronger recently so that’s really where I start to impact the game a lot.”

Her game has been piecing together over a matter of years, having come from a netball background.

“For me it was always netball,” Rendelmann said. “I played netball for 11 years and was in the state team with that and then joining football was just, I found that just so much more enjoyable. “The people I’ve met along the way has just made the experience amazing.  “At first it was so social as well as fitness. “I had friends who had been playing at other clubs with the girls and they’d been playing with the boys and they said you just have to join, it’s just incredible.”

Now Rendelmann is focused on studying law and business at university and as for her football, she plans to just see “wherever my footy takes me next year.”